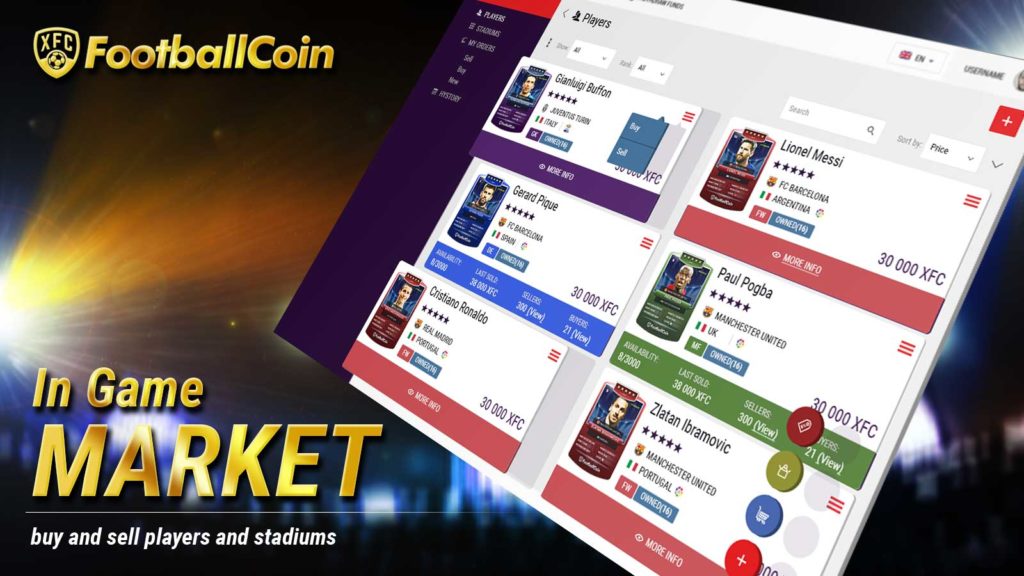 Contents show
1FootballCoin is getting ready to launch its in-game market. Let’s see what are the main talking points and run through the way the system works.
1.1The In-Game Market is developed to allow transactions to be made instantly and without taxes
1.2Taxes are only incurred when XFCCOIN or other assets are transferred in and out of the FootballCoin wallet
1.3The In-Game market will also allow the option to lease assets, together with those of buying and selling
2Related

FootballCoin is getting ready to launch its in-game market. Let’s see what are the main talking points and run through the way the system works.

FootballCoin’s market goes ahead with the plan to make the game’s assets available to the public. Upon purchase of player/stadium cards, these will remain in the ownership of whoever buys the products. The users will be able to continue to use those, as per the game rules. The cards will offer users a better chance of winning XFCCOIN in prizes.[/vc_column_text][stm_icon_list list_type=”font” title=”fa fa-check”]

[/stm_icon_list][vc_column_text]The In-Game market was developed as an alternative to the game’s wallet so that transactions can be made without incurring further taxes. For example, a user can now purchase a player card listed at 5*, directly from the game, and only pay the value of the card, without having to pay the blockchain taxes.Also, the users that already have assets kept in the FootballCoin wallets will not be affected. The game will detect the existence of those cards and users will be able to use them in competitions.The FootballCoin Wallet is developed on the bitcoin blockchain (wallet.footballcoin.io). Assets that are currently available in the wallet can remain there, unaffected by the existence of the market. All transactions made on the Bitcoin blockchain carry with them the regular blockchain taxes.However, the In-Game market will represent transactions that are made outside the Blockchain. Since these transactions will be much more frequent, FootballCoin has considered a system that will have the advantage of eliminating transaction taxes.[/vc_column_text][stm_icon_list list_type=”font” title=”fa fa-check”]

[/stm_icon_list][vc_column_text]If a user wishes to move funds (XFCCOIN) from their wallet into the game market, they will be able to do so at any point and the regular blockchain taxes will be incurred. Also, if a user wishes to sell an asset currently available in the FootballCoin wallet, or purchase an asset and have it moved to the wallet, they will incur the blockchain taxes. Transactions made in the game market will go through without the aforementioned taxes.[/vc_column_text][stm_icon_list list_type=”font” title=”fa fa-check”]

[/stm_icon_list][vc_column_text]Taking into account that some of our users will not be able to use the game platform for each competition, beginning with August, FootballCoin will introduce the option of leasing “assets”.A user will be able to place a card up for lease and determine the asking price for the card. The user that leases the card will be able to use it in competitions for the determined period of time. After the period is over, the card will return to its original owner, who will have the same options as before.[/vc_column_text][/vc_column][/vc_row]

Euro qualifiers 2020: 5 countries that were knocked out