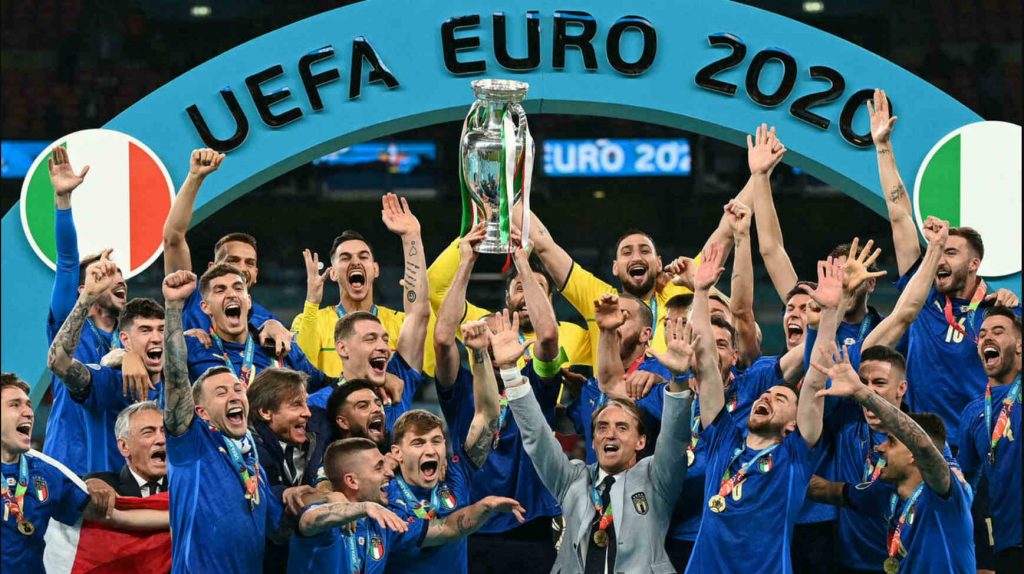 At the back of a grueling season, unlike any before it, international footballers have provided us with a European Championship of great quality. Euro 2020 has created new stars, cemented the reputation of older ones, and even humbled some players. Here, after innumerable fantasy contests, is the Team of the Tournament according to the FootballCoin points system.

Contents show
1Team of the tournament for Euro 2020
1.1Related

Team of the tournament for Euro 2020

It’s a testament to Jordan Pickford‘s abilities that he finishes the tournament ahead of rival Gigi Donnarumma, the man who proved to be Italy’s hero in the final and UEFA’s choice for Player of the Tournament. Of course, a lot of this is due to the number of games played, as well as to the fact that Italy proved much more threatening in front of goal. Regardless, this is one battle that England did manage to edge out in the Euro 2020 final.

All four semi-finalists, bar Italy, strangely enough, have players nominated on our list of defenders for Team of the Tournament. Laporte’s decision to represent Spain proved to be a wise one, with the Manchester City playing well throughout the campaign. In fact, no other central defender has earned as many points.

Meanwhile, Jordi Alba, Joakim Maehle, and Luke Shaw prove that the modern wing-back position is one of the most important ones in the game. Their scores also show how a great wing-back can propel a fantasy football team towards great heights.

If Italians were, somewhat bizarrely missing from the list of defenders, they are not when it comes to midfielders. Their control of passing avenues was thought, largely, responsible for the team’s success throughout the competition. Jorginho and Verratti, Squadra Azzurra’s great midfield directors make the cut, with Nicolo Barella not accruing quite enough points to make him a contender for this list.

The Spaniards, who dominated possession in every single game they played, are represented by Koke and Dani Olmo, who makes the subs bench. Meanwhile, the brave and positive Danes offer another player to our Team of the Tournament, versatile defensive midfielder, Perre Hojberg.

We’ve said it before, and this list confirms it. Classic strikers who do not score a lot of goals don’t help a fantasy football squad enough. Raheem Sterling and Lorenzo Insigne though contributed colossally to their teams’ attacking setup. Both not only scored goals and provided assists, but proved vital in how their team operated all the way through the final.

Harry Kane, who usually played in a more advanced position in Southgate’s team, barely misses out on a spot in the Team of the tournament.

What will your fantasy football teams look like for next season? The FootballCoin free contests continue throughout the summer, before revving up for a new campaign involving Europe’s finest leagues.