Signup now!
Home » Luis Enrique to stand down as Barcelona manager at the end of the season

Following the  6-1 win over Sporting Gijon, Luis Enrique has announced plans to step down as Barcelona manager. His contract will expire at the end of the season and Enrique does not have plans to seek a renewal.

News has come after a period of rumors that Enrique would not be manager of Barcelona for much longer. The rumors were amplified by the first leg 4-0 defeat against PSG in the Champions League. However after last night’s win Barcelona are again leaders in La Liga. They are working on the second leg confrontation in the Champions League and will player the Spanish Cup final.

Luis Enrique has cited the need for rest as the main reason for his decision. During his time at Camp Nou, Enrique won La Liga twice, the Spanish Cup twice, won the Champions League once and the Club World Cup. He has won eight of the ten competitions Barcolona have played in.

Barcelona are still in the running to win the double this season. Even with these achievements Enrique was not without his critics. He followed in the footsteps of Pep Guardiola and enjoyed similar success. However Enrique rarely seemed to be given the same appreciation by pundits and fans.

Following the important win against Gijon, Enrique broke news of his imminent departure at the post-game conference.

“I would like to thank the club for all the trust I have received. These have been three unforgettable years,” he said at the news conference.

“I’m not forgetting there are still three incredible months to go,” he added. “I think we can turn [the tie] around and if the stars are in our favour we can go through. Maximum effort and nothing more. The moment to say goodbye as the club deserves will come.”

Media scrutiny has always been very high at Camp Nou. Enrique had great achievements. He was destined however to always be compared to Pep Guardiola, the former team’s manager . The defeat against PSG brought up discussions of a possible replacement in the press. Regardless, it is difficult to think that a manager who had achieved so much in a short space of time could be on the chopping block by the Camp Nou board.

Pep Guardiola, the current Manchester City manager, was asked to comment on the news.

“I have two reactions,” Guardiola told a news conference. “As a Barca fan I am so sad because we are going to miss the perfect trainer for Barcelona, for his personality and character. In his two or three years he played unbelievable football with unbelievable players.

“The second reaction is I understand completely and I wish him the best. As a fan, a member of Barcelona, I say thank you for these three years in my club.”

Guardiola had previously announced he has no plans to manage Barcelona again in the future. Many names appear in the press as possible candidates for the Barcelona job.  Mauricio Pochettino is one of those, following the impressive work he has done at Tottenham.  Among the favorites to land the job are also Sevilla’s Jorge Sampaoli and Athletic Bilbao’s Ernesto Valverde.

Josep Maria Bartomeu, the Barcelona president, has talked about the process of choosing a new manager. He has also praised Luis Enrique’s time as manager of the club.

“This summer, we’ll get a super coach,” he told Barca TV. “We’ll continue to work with total discretion, calmly and normally, until June 30 and then we will announce who it will be. We will try to announce his successor on July 1 and focus on the trophies at hand for now.”

“We have to be very happy for the work he has done until now, and accept his decision and hope that the season finishes in the best way possible, with winning trophies. In the summer, he told [sporting director] Robert Fernandez and [director] Albert Soler that he might not continue and this week he told us and he considered it the right time to communicate it to the players.

“He only told the players after the game and everyone is sad because he’s given us a lot of success and he can still win more trophies.He’s given us a great vision of the team and that continues. He’s one of the great coaches in Barca history and there are still three months to go, in which he’ll need the support of everyone.”

Barcelona sit top of the table, but Real has one game in hand. They are to play Alaves in the Cup final in what may be Enrique’s final game. Barca also play PSG with the hope of a miracle turnaround that would see them continue in the Champions League. 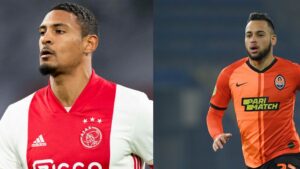