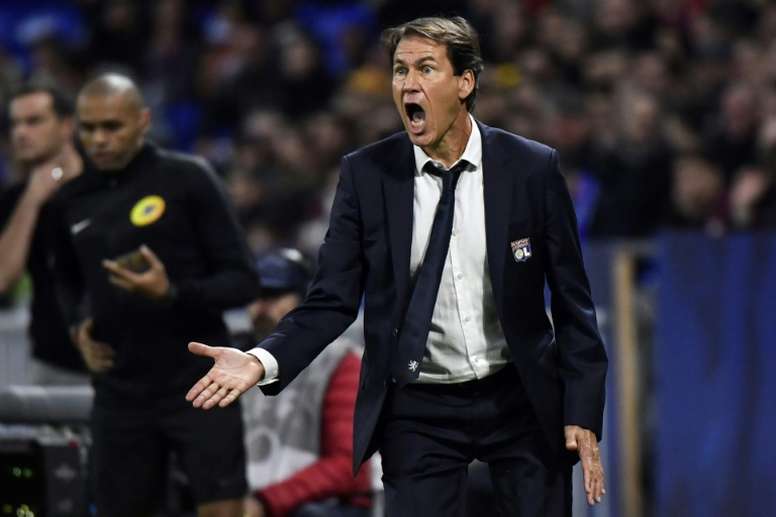 Rudi Garcia, the manager of Olympique Lyonnais, is the toast of the town after defeating Manchester City to claim a semi-final spot in the Champions League. The victory is no accident, however! Here are the tactics, formations, and stats behind Lyon’s castle in the air 2019/20 season.

Rudi Garcia has been carefully building his managerial career for nearly three decades. His football playing days turned him into something of a cult hero in France. Similarly, his time as a football manager has been spent, with the exception of one Serie A appointment, in the heart of French football.

The fist job Rudi Garcia took as a football manager was tending to lowly Corbeil-Essonnes. Here he acted as both player and manager and focused on learning his trade. Later he worked for Saint-Étienne, Dijon, and Le Mans.

Rudi Garcia’s big break came in 2008 when he was asked to manage his former club Lille. It is Garcia’s longest-serving position, coaching the club until 2013. At the end of the 2010/11 season, he won both the Ligue and Coupe de France trophies, one of the club’s greatest achievements. Until 2020, it was also Garcia’s proudest moment in charge of a club.

Later, Rudi Garcia managed AS Roma and Olympique Marseille, both highly rated positions. In 2019 Jean-Michel Aulas appointed him as the manager of Lyon, taking over for Sylvinho, a club whose status has increased greatly during the last decade.

Rudi Garcia has painstakingly studied football tactics and training techniques in a career that spans nearly three decades. His latest triumph over Manchester City’s Pep Guardiola is a testament to his understanding of the modern football game.

Those who viewed Lyon‘s victory over City will have noticed the team’s capacity to press intensely high up the pitch. Moreover, Garcia’s men were able to force City into wide areas of the pitch where they usually held superiority. Finally, Lyon is a team that can work wonders on the counterattack but will not hasten an attack unless they have the upper hand in the final third.

These are all part of Rudi Garcia‘s methods and philosophy. Generally, the manager looks to have his teams set the pace of the game. For that, his players are required to maintain possession and fight to win the ball back quickly. Garcia tends to opt for aggressive players with an exceptional work ethic.

Tactically, Rudi Garcia aims for flexibility and cohesion. Lyon will often defend with a back five line. In spite of the small width between players, this is not a rigid approach. The defenders will look to force the opposition into wider areas and quickly engage for the ball. Once it’s been won, the right-backs (Leo Dubois and Maxwell Corney, usually) will fire up the flanks in search of a vertical pass to carve through the opponents’ defense.

However, quick transitions are not the only way Lyonnais can gain an edge. The exceptional ball control of the likes of Memphis Depay, Houssem Aouar, or Moussa Dembele, make it very difficult for any team to press against them. Proactive attempts to win the ball from Lyon’s players often lead to the French team gaining the space they need to create goal-scoring opportunities.

Rudi Garcia, as previously mentioned, favors the 5-3-2 formation. It’s a mixture of old school philosophy and modern football traits. Lyon is usually busy creating as little space for their opponents to maneuver. But, when on the ball, they like to play vertical passes that make the best out of the technique and pace of players like Karl Toko Ekambi and Mousa Dembele.

Direct passes alone are not OL’s only hope of creating chances. As we talked about, their creative players control the ball with ease and can take advantage of opposition pressing. This is why Rudi Garcia’s players are often comfortable with holding possession, moving their wing-backs forward for support, and keeping their attackers on the lookout for space between the final line of defense.

The defensive elements are where Lyon has excelled throughout the 2019/20 season. Integral to their success is the aggression and work rate displayed by the three central defenders, Marcelo, Jason Denayer and Fernando Marcal.

They will usually occupy a rather advanced position near the central of the pitch. Pressing is important in Garcia’s tactics, but kept at medium level, as to avoid letting their opponents from using direct passes.

When out of possession, Leo Dubois and Maxwell Cornet, the wing-backs, will drop deeper to offer extra support. Furthermore, the central midfielders, Bruno Guimaraes, Houssem Aouar and Lucas Tousart, will also come deeper, play in a straight line and block passing avenues.

Lyon’s goal is to force their opponents into wider areas where they have numerical superiority, or to encourage them to make a mistake that will leave them searching for a counterattack.

The 5-3-2 (or 3-5-2) has worked wonders for Lyon who have conceded the least number of goals using this formation. In goal, the Ligue 1 side has the experienced Anthony Lopes, deputized by Ciprian Tatarusanu. While clean sheets are not a frequent occurrence, both goalies provide good defensive cover.

Can Lyon challenge for the Champions League trophy?

Lyon is through to the semi-finals of the UCL. It’s a historic event for the Ligue 1 club. Their next opponents are Bayern Munchen, the obvious favorites to win the competition. Hans Dieter Flick‘s team arrives in the match on the strength of an 8-2 thrashing of FC Barcelona.

Rudi Garcia’s Lyon is an unpredictable team because of the quality of their players. Naturally, Bayern will look to block their opponents’ stars from expressing themselves freely.

The winner is anybody’s guess, but, you can prove your knowledge of the game on FootballCoin, the most in-depth fantasy football game!