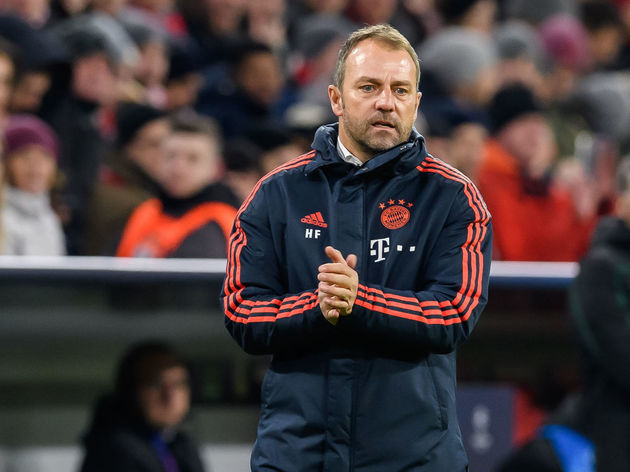 Hans-Dieter Flick could hardly have believed the opportunity presented to himself in 2019, managing Germany’s most successful club, Bayern Munich. A balanced, positive approach to the game has brought the Bavarian club back to the top of the Bundesliga. Here are Flick’s tactical tweaks that have rejuvenated Bayern this season.

When Flick was announced as Bayern’s new head coach in 2019, he was hardly the big-name manager many would have expected. However, once again, this was a well-informed decision made by the Bavarians’ board.

Hans-Dieter Flick would have been well-accustomed to the fans attending matches on Bayern Munich’s stadium, prior to joining the club in a managerial capacity. Flick played more than 100 matches in the Bavarians’ famous jersey between 1985 and 1990. His managerial career began in lower tiers. However, in 2006 he took on the role of Assistant Manager for Germany‘s national team, acting as Joachim Löw’s right-hand man.

By 2019, Flick was ready for a change and accepted the offer to become Niko Kovac’s assistant at Bayern Munchen FC and ready to practice the taktik fußball he’d studied for many years. Following Kovac’s sacking later in the year, his assistant was presented with the opportunity to lead the first team.

While there’s not enough data to know for certain what Hans-Dieter Flick’s football philosophy, he has certainly embraced Bayern’s core tenants of play. These are based on dominating the game, retaining possession, and creating many goal scoring opportunities.

Under Pep Guardiola, Bayern was a team that liked to build from the back. This approach has been re-embraced under Flick. The manager emphasizes positional play. The team looks to control the midfield area, with Goretzka and Kimmich dropping deeper in order to safely maneuver the ball into dangerous areas.

Ball retention may the aspect with which Flick’s Bayern is most preoccupied with. When in possession, the team looks to maintain superiority on all areas of the pitch, without moving the attacking players out of position.

Bayern Munich, prior to the season stand-by, was enjoying something of a renaissance under Flick. Philippe Coutinho explained some of the tactics employed by the new manager.”He places a lot of emphasis on compact, coordinated, and, at times, high pressing so that the opposition can’t get into their game at all.”

Dieter Flick’s preferred formation has been the 4-2-3-1. When attacking, the team often switched to a 4-1-4-1, where the central midfielders move further towards the mid-line, looking through play through the lines.

Robert Lewandowski is enjoying another great season as Bayern’s lone striker. Many of his goal scoring chances have been created as result of the clever use of space by Thiago and, especially, Thomas Muller, the self-professed raumdeuter.

While Flick does instruct players to start buildup from the back, the way Bayern moves the ball forward is through direct, vertical passes. These will either seek out an unmarked player positioning himself between the lines, or direct passes over the opposition’s defense.

This approach would be risky for a club with lesser quality players, as there’s a large risk of losing possession. However, the excellent passing abilities of Kimmich, the strength and techniques of Lewandowski and Gnabry, and David Alaba’s attacking runs, make Bayern a dangerous team in attack.

As expected, Flick imposes an intense, high-pressing style at Bayern. Players look to gain the ball back in the opposition’s own half. Often times, they will create passing traps where they will leave a small amount of space between themselves and the opponent, before attacking the ball once it’s been played.

As mentioned previously, Bayern’s central midfielders like to occupy the mid-line and press high off the pitch. This often forces teams to try and play wide. Here, Bayern overloads these areas with the wide midfielders and central defenders assisting the wing-backs.

Bayern Munich has dominated the Bundesliga mercilessly for over a decade. Still, challengers have risen. Bayern Leverkusen, RB Leipzig, and, especially, Borussia Dortmund play pure, exhilarating forms of football. In spite of this, they seem incapable of loosening the Bavarians’ grip on the Meisterschale.

Bayern Munich under Hans-Dieter Flick is on a great winning run. Their balanced, yet positive style of play has brought them back to the top of the standings and have made them favorites to add yet another Bundesliga trophy to their vast cabinet.