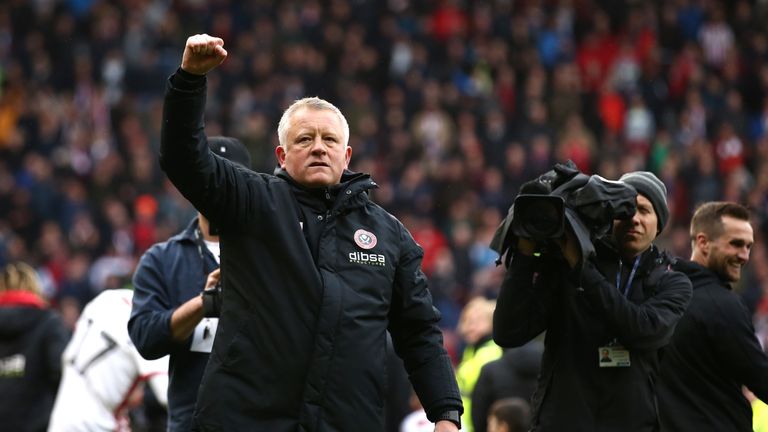 Sheffield United’s Chris Wilder has wasted absolutely no time in making an impression on the Premier League. Not only has Wilder guided the Blades through multiple promotions. But, in 2020, Sheffield United are Europa League hopefuls in spite of their newly promoted status to the first tier. Here are the tactics, formations, and football philosophy behind the season’s most unlikely football success story.

Contents show
1Chris Wilder’s style and philosophy
2Sheffield United’s tactics and formations
3Tactics used in the Premier League
4The tactical roles of Sheffield’s players
5What does the future hold for Sheffield United?
5.1Related

Wilder has enjoyed a very interesting career, both as a player and as a manager. On the grass, he was registered with Sheffield United for the better part of his career. He also enjoyed spells with other lower-tier clubs.

His managerial career started in much the same way. But, after helping Oxford United and Northampton punch high above their level, he was given the opportunity to manage his boyhood club.

Sheffield United, a club with more than a century of footballing tradition, was struggling at the time of Chris Wilder’s appointment. The Blades had last played in the Premier League in 2007 and had suffered a further relegation, to League One, in 2011.

Wilder’s old-school attacking approach proved successful almost immediately. Sheffield’s tactics changed and so did their position in the table. The team was hopeful of avoiding another embarrassing relegation in Wilder’s first year in charge. Instead, they managed to win the League One title with 100 points to their name, a club record.

Next, the team was put to the challenge in the highly competitive Championship. Wilder’s offensive 3-4-1-2 formation, predicated around the use of overlapping centre-backs, was a hit and the team found themselves gaining another promotion at the expense of favourites such as Brentford and Marcelo Bielsa’s Leeds United.

No other Premier League team has been quite as wise about spending their resources as Sheffield United has been. Their squad, which has brought the Blades to the seventh place of the EPL at the time of writing, is built largely around players with little to no first-tier experience prior to the 2019/20 season. Most of these players were brought to the club on a free deal, or no more expensive than £1m.

Sheffield may be associated with an approach that puts emphasis on hard work. But, this is certainly not a boring side. Chris Wilder‘s men play attacking football designed at providing early goals.

During their remarkable Championship season, Wilder employed a 3-4-1-2 formation. The decision he is given the most credit for is the decision to use overlapping centre-backs in order to overwhelm opponents in wider areas.

It’s a brave approach that can cause opponents with plenty of surprises. Defenders taking on attacking roles create additional avenues for goal scoring chances. However, this approach must also include the team’s ability to maintain possession or get back into their defensive shape once the ball has been lost.

Tactics used in the Premier League

Chris Wilder opted to slightly alter his regular formation, moving to a 3-5-2. This formation is meant to strengthen Sheffield’s defence and to stop a more technically gifted set of players from finding space between the lines.

Otherwise, Sheffield’s main core of players are the ones that gained them promotion in the first place. Wilder’s loyalty to his players adds to their commitment and courage.

When out of possession, Sheffield United’s defenders maintain shape. However, when on the ball, the Blades will show no fear in getting players forward, encouraging them to overload the wide areas, getting defenders forward and creating passing opportunities through the quick movement of their strikers.

The success of this approach is all the more remarkable given the high level of both physicality and technical skill needed to pull it off. Chris Basham’s competent display as a centre-back, Baldock and Stevens’ tireless runs on the wings, and Lys Mousset’s clever use of space, all contributed to Sheffield’s results.

The tactical roles of Sheffield’s players

A good part of Chris Wilder’s success can be attributed to his consistency in terms of squad selection. Many of Sheffield’s most important players have started the vast majority of matches this season. While this approach risks fatiguing players, it also helps build on the chemistry that was created in previous campaigns.

Chris Basham epitomizes Sheffield’s style of play. The centre-back’s leadership on the field has proven an inspiration to his colleagues. In spite of relatively limited passing and technical abilities, his bravery and knowledge of the game allow him to take on a ball-playing defender role that helps the team in developing attacks.

Buildup begins at the back. Here, John Egan and Jack O’Connell distribute the ball, usually wide, while John Lundstram will move back, effectively creating a back three line. This creates a triangle shape ideal for building up through short passes. The same approach is used throughout the field.

Sheffield’s attacks are created through half-spaces and on the wings. Most often, Lundstram and John Fleck will act as distributors, with the aforementioned defenders looking to assist them and create superiority against the opposition’s marking.

The overloading of the wide areas leads to most of Sheffield’s goal threats. Once in the final third, Sheffield’s players may look for a quick pass past the defence line. In other cases, underlapping, or overlapping defenders will receive the ball and attempt a shot or cross to one of the forwards. Finally, strikers are encouraged to run opposite to the area where the ball is being played. Sheffield’s players will then attempt to switch play from one side to the other.

While forwards Lys Mousset and Oliver McBurnie are integral parts of Wilder’s strategy, they are far from the only players expected to score goals. In fact, this season midfielder John Fleck is tied with Mousset as the team’s top scorer. Defensive midfielder, Lundstram, is a close third.

What does the future hold for Sheffield United?

Recent years have been a remarkable journey for Sheffield United, from a team seemingly condemned to the lower echelons of British football, to a club seemingly destined for European football.

Whatever the outcome of this season and the ones following it, one thing is certain. Chris Wilder’s brave and innovative tactics have not failed in leaving a mark on English football.