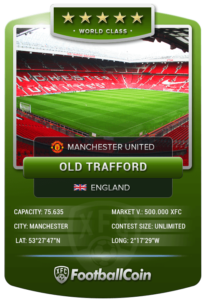 In the FootballCoin economy stadium card owners play the role of Competition Managers and can organize their own competitions according to the ranking of the stadium they own.

There are two major type of stadium cards, based on the stadium ranking system:

These are cards generated for lower ranking stadiums :1 star and 2 stars. These cards are free, in unlimited supply and are not generated as digital tokens on the blockchain.

Free stadium cards can be used by any user to organize an unlimited number of contests in the following way:

The maximum number of users that can join each contest is 11.

Stadium cards with a featured value

These stadium cards have a value and can be traded by users (against XFC Coin) on the in-game market. The price is determined by supply and demand.

The stadium cards with a featured value are digital tokens issued in a limited and fixed amount on the blockchain. These cards can be used in the game only by users that have them in their game account.

The rule for using the stadium cards is one stadium per one contest. This means that if you wish to use the same stadium (e.g. Santiago Bernabeu) in more competitions simultaneously, you will need to own more cards of that stadium. The number of contests you can organize simultanously will then depend on the number of stadium cards you own.

THE STADIUM RANKING IS DETERMINED BASED ON THE REAL SEATING CAPACITY OF THOSE STADIUMS.

Owners of stadium cards with a featured value can organize H2H (Head-to-Head) contests, Double-Up contest or Tournaments, as they wish.

The number of users that can join to these contests will be determined by the stadium ranking in the following way:

The earnings of the Competition Managers are based on the stadium ranking as follows:

The total number of cards (tokens) issued for each of the football stadium is determined in the FootballCoin economy as follows:

The distribution of the stadium cards will be done as follows::(out of the total number of cards issued for each stadium)

put on sale progressively in the regular transfer windows.

– a maximum of 1% of the total number of users;

Earnings through the sale of stadium cards will be used in the following way:

used in the development of the game;

for promotion and marketing;

for prizes and bonuses guaranteed by the game.