Chelsea defender Victor Moses has announced his intention to retire from international football. Moses was an important figure in Nigeria’s 2018 World Cup campaign.

Moses has decided to call time on a promising international career. The 27 year old has amassed 37 caps since playing his first game for Nigeria back in 2002. His record includes 12 goals for the national team, which he’s represented in two World Cup tournaments. 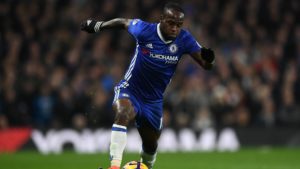 “I would like to announce that after much thought. I have made the decision to retire from playing international football.I have experienced some of the best moments of my life wearing the Super Eagles shirt and have memories with me that will last a lifetime. Nothing will ever compete to what it felt like to represent Nigeria on behalf of our country,” Moses’ statement read.

“However I feel that now is the right time to step away in order to be able to focus fully on club career and my young family as well as to allow the next generation of Super Eagle stars the opportunity to step up and to flourish. We are blessed as a nation to have so many exciting young players coming through and now is their time,” the defender said of his decision.

This summer, Moses was a starting player in all three of Nigeria’s World Cup games. The Super Eagles altogether left a good impression in spite of failing to qualify from was dubbed the group of death by observers. The Nigerians played alongside Argentina, Croatia and Iceland. It was Marcos Rojo’s late goal for Argentina, in the third game of the group, that put Nigeria out of the tournament.

The match against Argentina was likely also Moses’ last chance to score for his country. The player converted a penalty against the South Americans. It wasn’t enough though as the Nigerians lost 2-1. The three points were enough to gift Argentina the second qualifying place in the group.

Moses says he has already spoken to Nigeria’s coach Gernot Rohr. He also praises Nigeria’s new generation of players, saying fans should make be hopeful of the future.

“I have already spoken to the manager by telephone and would like to say thank you to him and his staff, the NFF and all of my team-mates for all of their support over the years.”

“Most importantly I would like to say thank you to the Nigerian people for believing in me and supporting me over the years. It’s meant the world to me and my family and I will always be a proud Nigerian supporting the team.,” the defender tells fans of the Super Eagles.

Meanwhile, Victor Moses is concentrating on his club career. Chelsea  got off to a superb start to their season, winning their opening Premier League game 3-0 against Huddersfield. The team takes on London rivals Arsenal on Saturday, on home ground. Moses is not expected to feature in the starting 11.