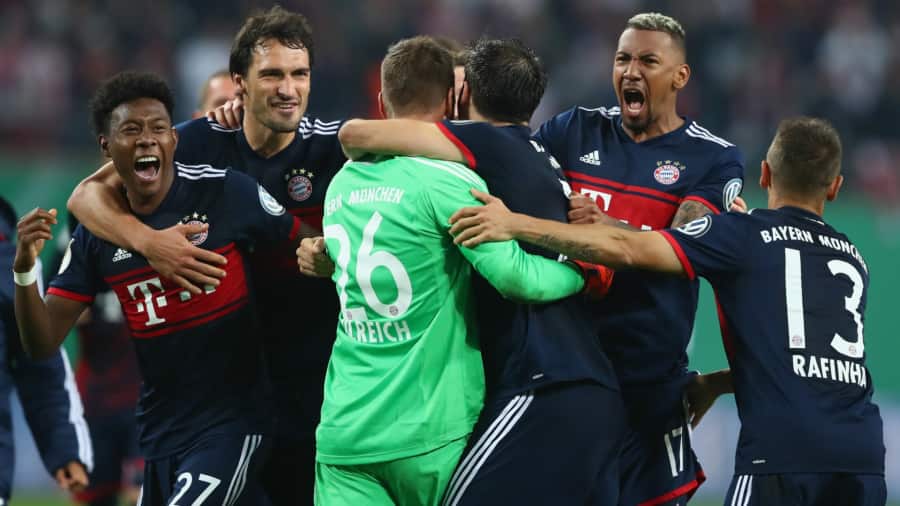 Jupp Heynckes guided Bayern Munchen to an important victory over an exciting RB Leipzig side in the DFB-Pokal.

Heynckes has returned to Bayern Munchen for the fourth time and has been greeted as somewhat of a savior for the team. With progress under former manager Carlo Ancelotti seemingly screeching to a halt, the board at Bayern took the decision to replace the Italian and give a familiar face the responsibility of putting the German champions back on track.

One of Heynckes’ first real tests came against RB Leipzig, the side who finished last season in an unexpected second place and a team trying to build on that foundation with the hopes of becoming a permanent fixture among Bundesliga’s top clubs.

It took coming 1-0 from behind and a penalty shootout to offer the Bavarians victory. RB Leipzig struck first through a penalty converted by Swedish winger Emil Forsberg. Thiago Alcantara managed to equalize only minutes later, but the game went down to penalties. Bayern needed Sven Ulreich’s save to determine the side that would advance to the last 16 Round of the competition.

At the end, Heynckes seemed to breathe a sigh of relief, knowing full well that victory tonight could turn to be vital for Bayern’s morale as they approach the rest of the season. “Penalties are always a lottery, but my players were very focused and converted very well. It’s an extremely important win to us,” the manager told reporters.

The result gave Bayern’s captain Arjen Robben reason to smile after several career setbacks, including Holland missing out on qualifying for the World Cup. The midfielder who has recently announced his retirement from international football praised the level of commitment of both teams.

“It was football at a high level with two top teams playing. There is too much to analyse. It was a fiercely intensive game with a red card. We conceded the penalty against their 10 men but luckily, we got the equaliser. Then, of course, we created many chances and were unlucky not to score again,” Robben told reporters.

The Dutch winger seems to relish working once more under the guidance of Heynckes, with whom the German side won the treble in 2013, and complimented his preparation of the game. “Heynckes had told us to prepare for the game like a final. Perhaps we were lacking a little freshness as we play every three days, so playing 120 minutes is not very pleasant. Thankfully, we are playing against each other again on Saturday so they have the same problem. But we are very happy to progress to the next round.”

In other positive news, it looks like Bayern’s Franck Ribery’s rehabilitation following knee injury is going well. The Frenchman is set to miss out on football for the rest of 2017, however, the injury looks to have been less serious than was initially judged by medical staff.