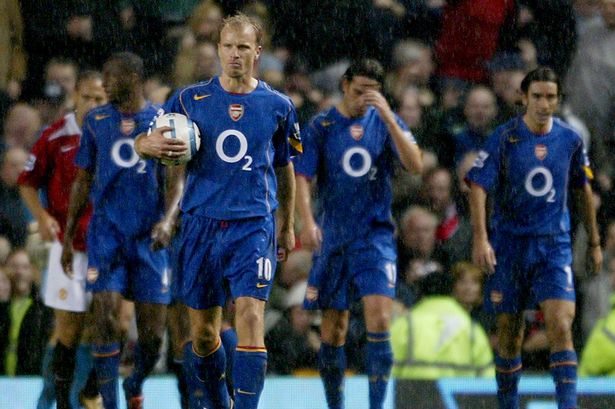 In October of 2004, Arsene Wenger’s Arsenal was riding a tall wave. The Gunners had not lost in any of their previous 49 matches and had distinguished themselves as the premier club in Europe. The so-called Battle of the Buffet put an end to that, with Manchester United finally getting one over their bitter rivals.

Context of the Manchester United vs. Arsenal rivalry

In many ways, the early 2000’s rivalry between Manchester United and Arsenal was the precursor to the modern-day Premier League. Sure, there was no talk yet of a Big six. As fans of the EPL and fantasy football, it’s well worth taking a look back at two of the strongest teams in the competition’s history.

On one side stood Alex Ferguson, the Scottish manager who had guided the Red Devils back to international success and out of a period of uneventful mediocrity for one of the world’s biggest clubs. His team had won the treble in 1999. And, the 2004 line-up still included a number of the players that had claimed continental glory five years prior. Among them were Phil and Gary Neville, Paul Scholes and Ryan Giggs.

Back in London, Arsene Wenger had helped revolutionize the tactical and training capabilities of the modern game. Nicknamed Le Professeur, the Frenchman had created a mix of, mostly, English and French players that had charmed the footballing the world. The squad, that included players like Dennis Bergkamp, Thierry Henry or Patrick Vieira, were nicknamed the Invincibles.

Who were the Invincibles?

For those only slightly familiar with the legend of Arsenal’s most famous side, it may now be time to answer a few questions.

The Invincibles was the nickname given to Arsenal’s squad that had won the 2003/2004 Premier League title. Prior to their 2004 match against Manchester United, they had been without a loss for a record 49 games.

In spite of the quality displayed by both Manchester United and Arsenal, two teams that shared a fierce rivalry, the 2004/2005 Premier League was won by Chelsea. This was the Londoners’ first Premier League trophy in its modern format.

Great names graced the stage for this derby. If you were to assemble a fantasy football draft back in 2004, your choices could have included the likes of Wayne Rooney, Ruud van Nistelrooy, Sol Campbell or Thierry Henry.

The match itself proved to be a scrappy affair as was the prediction. Nerves once more ran high. Dirty tackles were frequent and, to even the British commentators’ awe, few of them got booked.

Arsenal started strong right out of the gates, using their speed and fluid passing skill to create trouble for goalkeeper Roy Carroll, a surprising choice for the starting 11. Thierry Henry and Freddie Ljundberg wasted great chances. The latter was also challenged aggressively by United’s captain, Rio Ferdinand acting as a last-man defender. The challenge went unbooked.

In the end, it came down to penalty decision to perturb Arsenal’s crystal vision. Ruud van Nistelrooy scored from the spot for United, before young upstart, Wayne Rooney made it 2-0.

In between, there was one more goal, courtesy of the lightning speed footwork of Paul Scholes that was erroneously disallowed. But, in spite of the scoreline, the overall display had favored the men in the blue jerseys, Arsenal, a team whose incredible unbeaten run was coming to an end.

The battle of the buffet to some. Pizzagate to others

In 2004, the adversarial relationship between Alex Ferguson and Arsene Wenger was the focus of most sports programs and newspapers. United’s victory, earned under the tensest of circumstances, put Ferguson’s club back on track and helped the manager forgo retirement for a few more years.

Even more famous then the match itself is the so-called Pizzagate incident. While reports are still unconfirmed, it seems that the players and their managers were involved in a scuffle on their way to the dressing rooms. One of the Arsenal squad members is said to have aimed food, most likely a pizza slice, at Alex Ferguson. The mess was enough to force the manager to change into a tracksuit for the post-match interview. Safe to say this did nothing to smooth the relationship between the two warring parties.

The loss was enough to force Arsenal to lose their chokehold on English football. A period of relative unrest followed, which, in turn, contributed to Arsene Wenger’s ultimate departure from the club. This, however, would only happen in 2018. By that point, the manager’s influence on English football had been well established. The Arsenal Invincibles’ record is one of Wenger’s proudest achievements.

While Manchester United would not win the title in 2004, this victory helped renew the club’s vision. With players like Cristiano Ronaldo, Wayne Rooney, Roy Keane, or Ruud van Nistelrooy in their squad, they would once again challenge for the top positions in the EPL and abroad.

As for fantasy football and other games based on the sport, those were entering a golden period. This was due, in no small part, the global influence of many football stars. A new era was upon us.

Start playing
Contents
1Context of the Manchester United vs. Arsenal rivalry
2Who were the Invincibles?
3Rooney and van Nistelrooy should have been on your fantasy football draft
4The battle of the buffet to some. Pizzagate to others
5The aftermath